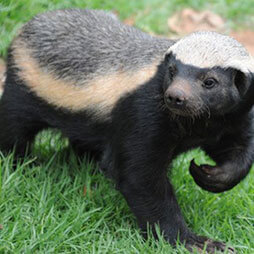 Blogging about badgers might seem unlikely – until they wind up in court. In 2011, a YouTube video entitled “The Crazy Nastyass Honey Badger” enjoyed a whopping following of nearly 90 million views; three minutes of a fearless honey badger foraging and hunting in the wild followed by a quick nap in between snacks – and a humorous narration delivered by comedian Christopher Gordon with the repeated refrain: “Honey Badger Don’t Care.”  The antics, images, and refrain began to appear on greeting cards, notably by Drape Creative and Papyrus-Recycled Greetings, both of whom were sued by Gordon, who had trademarked the phrase.

“He noted that while the first prong of the Rogers test cuts against Gordon’s claim, the second prong is a question for a jury to decide.

“The two-prong test allows Lanham Act lawsuits only where ‘the defendant’s use of the mark (1) is not artistically relevant to the work or (2) explicitly misleads consumers as to the source or the content of the work,’

“Bybee explained. ‘Gordon’s mark is certainly relevant to defendants’ greeting cards; the phrase is the punchline on which the cards’ humor turns.’”

To read the full pleading for the appeal, visit the Ninth Circuit Court’s website.