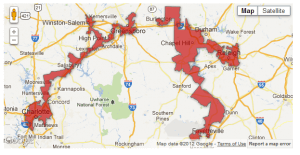 The legality of redrawing the lines for congressional maps has been hotly debated – is it gerrymandering or simply a timely redistricting update? The Supreme Court has been sorting that out on a case by case basis. Most recently Pennsylvania got the results: no can do. Michael Wines of The New York Times writes the following in his article: Pennsylvania Congressional District Map Is Ruled Unconstitutional: “Pennsylvania’s congressional district map is a partisan gerrymander that ‘clearly, plainly and palpably’ violates the state’s constitution”, the state’s Supreme Court said on Monday, joining a string of court decisions that have struck down political maps that unduly favor one political party over another.

To clarify, gerrymandering is the practice of manipulating electoral districts by altering their size and shape in a manner which will favor one political party over another, and in some instances, forcing one side to “waste” votes.  Grace Donnelly of Fortune Magazine writes the following in her piece 5 Things You Need To Know About Gerrymandering – Including the Definition: “For example, someone drawing district lines might cluster opposition party voters together in one district in order to concentrate their votes so that they influence only a few seats. Or it could mean grouping those opposition voters into districts where the other party has a lock on power – making it very difficult for the opposing party to win elections there.”

Gerrymandering, a term coined by founding father and fifth vice president, Elbridge Gerry, dates back to 1812. Yet the latest technology enables this practice to be monitored with precision.

Let that latest technology do your legal research for you – SmartRules understands the vital importance of knowing the latest details of court rules as well as new and repealed rules.